Tallaght University Hospital (TUH) is one of Ireland’s largest acute teaching hospitals, providing adult, psychiatric and age-related healthcare on one site. The Hospital is a provider of local, regional, and national specialties. It is also a national urology centre, the second largest provider of dialysis services in the country, and a regional orthopaedic trauma centre. The Hospital also has 67 paediatric beds under the governance of Children’s Health Ireland and 52 mental health beds under HSE governance.

The pilot project at TUH

TUH selected Imprivata OneSign® Single Sign-On and Authentication Management as part of a pilot project which aimed to reduce the time taken for clinicians to sign on to systems to update and access patient data. The project covered three departments with differing needs: the Acute Medical Assessment Unit (AMAU); Age Related Health (ARH) services; and the Oncology Day Unit.

The pilot project’s aims were ambitious given that TUH faced significant challenges. Clinicians were frustrated at the slow login procedures to gain access to up to 17 different systems. These included applications such as various patient record systems, medical images, patient admin, ordering, discharge procedures, and email.

Staff would need to access information from multiple systems and log in and out on various devices throughout a shift. The slowness of access was compounded by TUH’s IT infrastructure with old PCs running out-of-date versions of Windows. Frustration was further increased by the need to remember numerous login IDs and passwords, and the fact that devices would time out regularly.

This situation created additional security, confidentiality, compliance, and auditability issues. Sometimes user IDs and passwords were shared just so that clinicians could get the job done without additional delays. Passwords were often written down. There were also numerous calls to support to get forgotten passwords reset.

Performance and satisfaction levels were falling – something needed to be done.

The Imprivata solution implemented at TUH for the pilot project covering three departments consisted of the following integrated elements:

The pilot project has been a great success with significant progress against all aims.

“Imprivata solutions have helped reduce log in times significantly. Initial reductions were impressive and throughout the pilot project we have worked with Imprivata to optimise clinicians’ workflows even more. For example, our AMAU had initial time savings of 27 minutes. By optimising the workflows throughout the pilot, this increased to up to 58 minutes for each healthcare professional in every eight hour shift – valuable time that can now be spent with patients,” says Siobhan King, Tallaght University Hospital, Senior ICT Infrastructure Analyst.

Healthcare professionals report positive experiences using the Imprivata single sign-on solution. With a single user ID and password, initial access time to reach the PC desktop has been reduced from over 31 seconds to less than two. This login then gives access to all the relevant clinical applications for which that user is authorised to access from the desktop without the need for further logins or multiple user IDs and passwords. Staff have described relief at not having to recall plethora usernames and passwords during shifts.

The Imprivata team worked with TUH as the pilot progressed, building on initial time savings by further modifying system configurations, introducing technology the enabled “tap and go” technology, workflows, and procedures to deliver even more benefits. For example, the Oncology department’s initial overall nine-minute time-saving per staff member/shift was further improved through the pilot to deliver a 46-minute saving for each staff member per eight hour shift. The time freed up goes directly into improved face-to-face time with patients. Staff have also increased mobility between PCs throughout the department during shifts.

Improved governance and oversight is now possible. As staff members are less inclined to share login details, then it is much easier for managers to see who did what task and which patient data was accessed by whom. The audit trail is much more complete should issues arise.

“The streamlined single sign-on process made an immediate impact on productivity and was well received by staff. This is delivering real benefits. Faster access to systems is improving the performance of our healthcare colleague’s. They are hugely positive that they can give a better service to patients without the need for a major investment in new technology,” says David Wall, Tallaght University Hospital, Director of ICT.

TUH has realised all these improvements without the need to throw out their existing IT infrastructure. The Imprivata solution worked with TUH’s existing PC hardware and Windows operating systems. This proved cost-effective but also meant that the pilot could be rapidly deployed.

The good news about the Imprivata implementation and the improvement to workflows and patient facetime has spread by word of mouth to other departments within the Hospital. The plan now is to continue the rollout of the solution to other areas of the Hospital. Clinical and operational return on investment is being measured as the project extends. 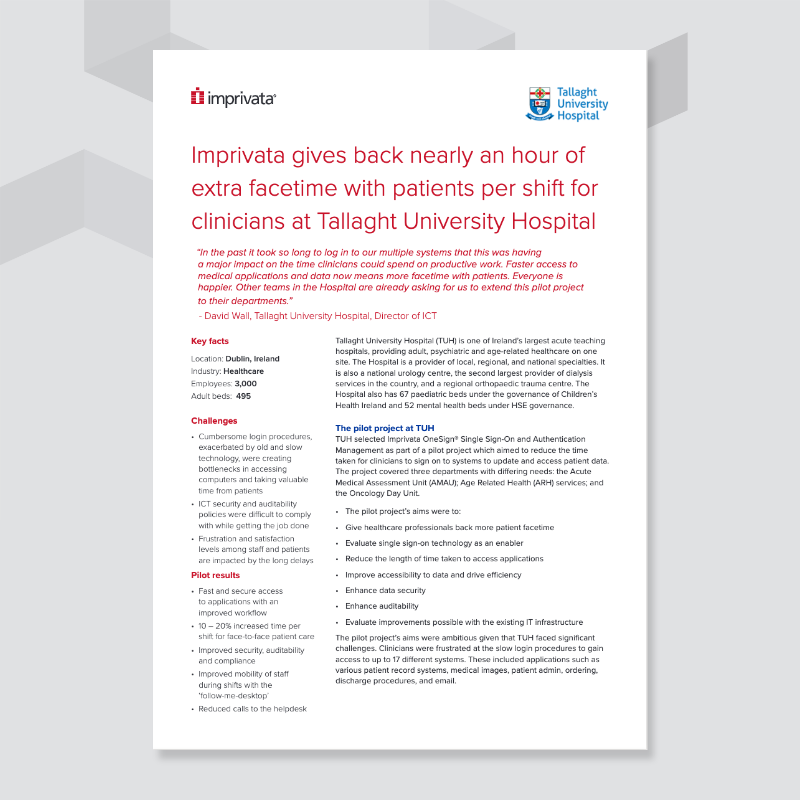